A new, fearsome fey for the AD&D 2nd edition game

Combat: Redcaps attack opponents directly and without fear, especially when defending their lairs. Redcaps usually employ their claws and bite in a fight, but they will use large weapons such as halberds, falchions, claymores or war clubs if they can get a hold of them. They are also fond of throwing large rocks at their opponents from above. Despite not being too bright, Redcaps can be very sly, and if outnumbered they often try to lure enemies into the deadly booby-traps that permeate its lair (such as falling boulders or hidden pitfalls). If the creature’s cap is soaked in human blood the Redcap will regenerate 2/hp per level; however, if their cap ever runs dry or is lost, they lose this ability and become stricken by weakness (-1 to attack rolls and armor class, movement is reduced to 6). Holy water burns them for 2d4 hit points per vial.

Habitat/Society: Redcaps are solitary creatures and will avoid the company of other creatures, even other Redcaps. In some rare occasions, however, a Redcap will ally itself with an evil mage or an annis hag for a short time if they share similar goals. They prefer to live in abandoned ruins or old castles in moorlands and heathlands, and will murder and eat anyone who trespasses into their lairs.

Ecology: These evil fey live to kill and eat, and are interested in little else. Humans are their favorite food, and children and Halflings are particular delicacies. Blood is also important to Redcaps because of their regenerative abilities (see above); unsurprisingly, a Redcap who is separated from its hat will try to get it back by any means possible. Redcaps’ teeth are an important ingredient of some magical potions; some sages say that people who carry these teeth are afflicted by a curse until they get rid of them. It is not know how Recaps are born, since female Redcaps have never been seen.
.
.
Postado por Ricardo Williams às 18:04 Nenhum comentário:

Brendan, author of the Untimately blog, posted these 20 quick questions about campaign rules. Here are my answers for my AD&D 2E campaigns.
.
(Note: I decided to do this post in English because I couldn't be bothered to translate the questions - and besides, all of my players know enough of the language to read this, anyway).

2. How are death and dying handled?
If your PC reaches 0 hit points, he falls unconscious and will lose one hit point por round; he is dead if he reaches -10 hit points.

3. What about raising the dead?
Spells such as Resurrection, Raise Dead or Reincarnation do not exist in my campaigns. Nothing sort of a direct divine intervention can bring a PC or NPC back from dead.

4. How are replacement PCs handled?
It depends. If the player wants to roll a new character up, the new PC will be one level lower than the lowest in the group and he will join the group as soon as possible; however, this new PC needs some story or in-game reason to join the party - he is found captive by the party, meets the party in a tavern, is a long-lost relative of the deceased PC, etc.). Alternatively, a henchman can be promoted to PC status.

5. Initiative: individual, group, or something else.
Always group initiative, for PCs and NPCs.

7. Do I get any benefits for wearing a helmet?
Yes. It will be harder for your PC to be knocked out or have his ears chopped off.

8. Can I hurt my friends if I fire into melee or do something similarly silly?
Absolutely. Friendly fire is a real possibility in combat. Be careful when shooting arrows or fireballs into melee.

9. Will we need to run from some encounters, or will we be able to kill everything?
Player Characters need to know when to run and when to fight.

Having said that, I always try to be fair to my players and don't design encounters to kill the PCs in a deliberate manner. Most of the time the characters will have the means to overcome obstacles or combat situations.

On the other hand - and this is important - I do not take "balance" into account while designing encounters and there is no guarantee that the characters will always be victorious.

11. Are there going to be cases where a failed save results in PC death.
Absolutely. Not only there are many "save or die" spells in the game but also many monsters and creatures that can petrify, immolate, dissolve or kill with their gaze/breath/touch, not to mention those that are extremely poisonous.

Hey, what did you expect? Adventuring is a dangerous lifestyle. If you want guaranteed safety, go to Disneyland.

12. How strictly are encumbrance and resources tracked?
Encumbrance is handled very loosely, but I tend to apply the rules for Basic Encumbrance as described in the Player's Handbook, including its penalties for moderate (or heavier) encumbrance categories. Resources (food, ammunition, adventuring gear and spell components) are tracked fairly strictedly and players should pay attention to their PC's resources.

13. What is required when my PC gains a level? Training? Do I get new spells automatically? Can it happen in the middle of an adventure, or do I have to wait for down time?
PCs attain new levels whenever they gain enough experience points; training is not required. However, I only award XP after the adventure is over.

A wizard or specialist mage gains one spell automatically every time he attains a new character level - this spell can be chosen by the player, but the DM has the final word on it. Specialists must choose a spell from their main school. Otherwise, wizards must find spell books, scrolls or ask other mages to teach them new spells.

14. What do I get experience for?
Good role-playing, problem-solving, achieving plot goals, overcoming challenges, putting your PC abilities to good use, completing the adventure, defeating monsters and opponents in combat (note that defeating does not mean necessarily killing your opponents).

15. How are traps located? Description, dice rolling, or some combination?
A combination. If the player wants to find and disarm traps by dice-rolling, that is fine by me. However, a good description of his PC's actions can give a substantial bonus to your roll or even remove the need to roll dice at all.

But, of course, players can always activate traps by accident...

16. Are retainers encouraged and how does morale work?
The players can certainly employ retainers (hirelings, followers and henchmen) if they want, especially if the party is small. Morale and loyalty work as per the rules in the core books.

17. How do I identify magic items?
There are many options: trial and error; spells such as Read Magic (for scrolls), Detect Magic and Identify; hiring a NPC to identify the items (usually a Diviner); Bardic Lore; and, in the case of magic potions, the Alchemy NWP.

18. Can I buy magic items? Oh, come on: how about just potions?
Magic and magical items are relatively uncommon in my campaigns and settings, and you will not find magic items' shops or emporia like Ollivanders. But keep in mind that:

Potions can be bought relatively easy, depending on the size of the town or city and the relative skill of the local alchemist or herbalist.

Scrolls of up to 2nd spell level can be found or purchased in any medium-sized (or larger) town or city that has a mage guild or arcane tower. However, even in large cities getting a scroll with a 3rd level spell will be very difficult (and even then your PC must be a member of a mage guild) and/or expensive (in gold pieces or favors, sometimes both).

Simple staves, wands, rings and a few "disposable" items are not for sale though they can be comissioned if your PCs can find an Enchanter of adequate power and disposion - and they will also be very expensive.

Major magic items or weapons and armor over +2 will never be available for sale no matter how large the town or city. However, some of the largest cities in the campaign may have some independent magic item brokers that can be contacted by PCs to trade or procure specific items - but they are not easy to find and their wares are never cheap.

Shops that sell spell components, on the other hand, are quite common in large towns and cities - though they may not have very rare or unusual items in stock.

19. Can I create magic items? When and how?
In my campaign, creation of magic items, such as scrolls, potions, wands, etc., follow the rules in the Dungeon Master Guide, with some aditional stuff from Player's Options - Spells & Magic. I'll inform the player as soon as he reaches the minimum necessary level for creating magic items.

20. What about splitting the party?
That's up to the players and it is something that can happen due to many different circumstances. 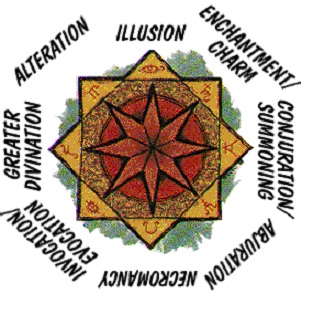 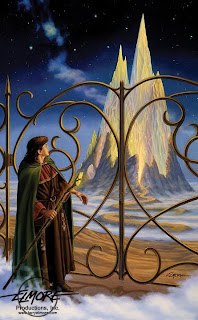 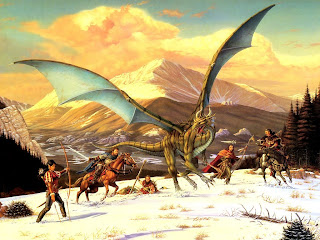 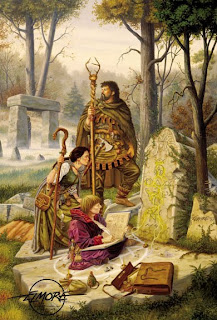 Reflexões sobre a 5a edição